THE 9th BIENNIAL OF DOURO 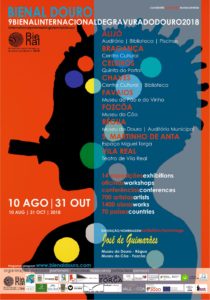 Based on the oldest demarcated wine region in the world – the Douro and winner of two heritages of humanity granted by UNESCO is world renowned both for its vineyard landscape and for the archaeological heritage of the Côa Valley. Here is the largest sanctuary of Paleolithic engraving of the world, but the Douro is also in the contemporary scene one of the biggest events of graphic art in the world, creating a strength and dimension that goes beyond the borders of the country and is projected for infinite horizons.

Pursuing this aim and ambition achieved, the Biennial of Douro has overcome the challenges of interiority, the economic crisis, the cultural crisis, the engraving crisis itself and it has kept alive the assumptions of the art and the autonomy of the printmaking in the context of the contemporary art. To this end, have contributed the traditional printmaking and its secular alchemy, but also, the renewed trend of digital printmaking and the new media at their disposal, in order to give it the autonomy it needs to survive. The open field to the printmaking by the new hybrid languages and nontoxic techniques, have designed it impact in an innovative way and with the vitality so long desired in its fields.